As a critic of various forms of media, I’ve often found that the most challenging things to critique are those that fall into the “good but not great category”.  You see a bad book, movie or videogame is relatively easy to tackle.  You just simply point out what is wrong with it and explain why it is that does or that doesn’t work in a clear and creative manner.  Additionally, if the work offends you in some way it is equally important to convey why this offends you and not sound like a raving lunatic with a platform.  Similarly, when you’re looking at a great work discovering ways to properly convey why it is it works so well is easy enough so long as you approach it in a cool and rational manner.  But something that is not objectively bad but still inspires little positive passion in you?  That’s a challenge and Lucifer: Book One is absolutely one of those challenges.

The best way that one can describe the Lucifer comic series is by comparing it to a successful spinoff of a landmark television series like Star Trek: Deep Space 9 or Frasier.  Sure, they were good shows that garnered their own number of fans and accolades but they could never hope to escape the cultural shadow that the preceding series cast.  Yes, DS9 was a great show with its own incredible plot and a great cast of characters but it never had a chance of challenging the cultural impact that The Next Generation left on the franchise, television and science fiction in general.  Likewise, for as much as we might like Angel it never had a chance of surpassing Buffy the Vampire Slayer in sheer originality and cultural impact.  And Lucifer is without a doubt one of these spinoffs.  It is to Neil Gaiman’s Sandman what Better Call Saul is to Breaking Bad and it’s never going to escape that shadow.  Especially when the book itself seems to openly invite comparisons with its predecessor.
For those of you who are wondering what the hell I’m talking about, the original Lucifer was a comic series written by Mike Carry that ran from 2000-2006, spanning 75 issues, a single one shot and had its foundation set up in Neil Gaiman’s Sandman series. Specifically, the character was introduced early on the series as a temporary antagonist before having his own book’s foundation Volume 4, Season of Mists which, coincidentally, is my favorite comic book story arc of all time and I highly recommend checking it out before continuing with this article.  In any case, the story of Lucifer: Book One takes place sometime after the end of the Sandman series.  Lucifer has quit his job as lord of the underworld, opens a nightclub in LA and seems to be done with Gods, Angels, and Demons.  Unfortunately, it quickly becomes clear that they aren’t done with him and he finds himself needing to adapt to new circumstances in order to survive.  And, as you may have guessed, we decided to take a look at this book in order to cash in on the return of the Fox television show of the same name, but honestly you can pretty much take everything you know from the show and set it on fire because it has next to nothing to do with the original graphic novels.
Now the thing about Book One is that it’s a very peculiar specimen in that it doesn’t entirely work as a 382-page story arc.  When it does work, however, it’s because it’s more or less ripping off The Sandman’s formula.  Not in the rehashing of themes and lore kind of way but in the story structure kind of way.  You see both The Sandman and Lucifer are books that feature extremely powerful protagonists who could make most of their problems go away with a simple wave of their hand which makes more narrative tension nonexistent. To counter this both books either put our protagonists in situations where, for some reason, they can’t make their problems go away like this or focus on entirely original, usually human characters as the protagonist for the arc.  Usually, these arcs end with the titular characters showing up as last-second deus ex machinas to help them out of whatever circumstances they find themselves in, usually tying into the larger mythos in some way.  Sometimes it works.  Sometimes it doesn’t.  But when it does I can honestly say that it works almost as well as when Neil Gaiman did it.

In total, the book has six story arcs and of them four focus on everyday people as the main protagonists who just happen to get caught up in Lucifer’s schemes.  Their environments are all well-established, the characters themselves are very well developed and tie into the mythos in interesting ways.  The best example of this comes in the third story arc titled Born with the Dead which focuses on a young girl named Elaine who sees dead people and attempts to solve her best friend’s murder with said friend’s help.  Within the story they quickly establish her personality, her abilities and what their apparent rules are, all the while tying it together with a nice little murder mystery story seen through a child’s eyes.  Then Lucifer shows up at the end to rescue her for reasons that are only explained later in the book but never hinted at in the story itself, (more on that later).  In another story, we get a number of characters in a city whose lives are irrevocably changed because of events that Lucifer sets in motion.  Sometimes it’s for the better but usually not so much and when the book focuses on characters like this it’s pretty good.  Not necessarily an “I NEED TO READ THE NEXT ISSUE NOW!” good but still a solid read all the same.  Unfortunately, the rest of the time we have to spend it with Lucifer.

Now, I won’t go so far to say that he’s a bad protagonist per say but he is not exactly the most compelling character to follow.  The main problem is the way they characterize him as he comes off less as The Price of Darkness then he does a Constantine rip-off who turned out better than he had any right to be.  What do I mean by this?  Well just look at the way he’s characterized and written.  He’s a well-dressed, too clever by half man with blond hair who always seems to be on the verge of disaster but manages to avoid it due to some last second trickery and/or impossibly well-placed guards or traps.   All the while, he maintains a demeanor that says he’s on your side and may, in fact, have the same goal as you but is, in reality, a selfish scheming monster who is only out for himself.  It’s not necessarily a bad thing and it’s kind of hard to imagine another way to characterize the literal Devil but…I don’t know.  While reading this book it felt like I had seen a few too many stories with a protagonist like this a few too many times before.  Maybe it was fresher back in the early 2000s but now it just feels a little stale. 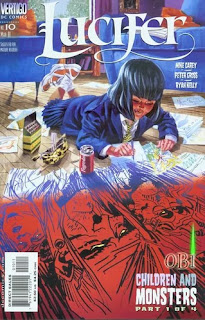 It also has to be said that the overall story of the book doesn’t entirely work.  It is nice to see all the pieces come together in its final arc but what Lucifer’s end goal in all of this is kind of comes out of nowhere. There isn’t any real build up to it and gives the impression that the writer thought it up halfway through writing it or something.  Once again, the best example of this comes in the story Born with the Dead.  The story in question ends with Elaine solving the murder but poisons herself by accident in the process.  As she is literally dying on the killer’s floor Lucifer shows up out of nowhere to revive her for reasons that are never explained in the story itself.  It’s only during the final story arc when we get our answer as to why he did this but by then it just feels as if the writer retconned her to this role as opposed to always having her in it and things like this happen in every story arc.  Maybe I wasn’t paying enough attention but the end result of it all prompted a lot of “where the hell did that come from?” reactions from me.
Of course, it does have to be said that the artwork is consistently good.  The designs are cool.  The coloring works really well and the panel layout keeps everything well-paced.  It’s just good artwork.  But it’s not enough to make it a must read

In the end, Lucifer Book One is just good but not great.  Its individual stories work well but its overall narrative?  Not so much and lacks the kind of narrative foresight that its predecessor had.  Beyond that, I really don’t have much to say about it.  It’s just okay and things that are just okay are the hardest things to critique.  Maybe the later books are better but this one can be put in the “I’ll get around to it” section of your bookshelf.