We are just a few days away from the release of Spider-Man: Homecoming and finally discovering if the additional creative power of Marvel Studios can salvage the film end of one of the comic medium’s most beloved icons.  From what we’ve seen in the trailers the film looks decent and is packed full of the kind of energy and charisma that you’ve come to expect out of a Marvel Studio film with early reviews that have so far have been overwhelmingly positive.  While I personally am a bit indifferent to the web crawler’s first solo outing in the MCU, (mainly because I cannot stand high school films), I am curious to see just how he’s going to fit into the grand scheme of things and what directions the studio is going to take the character from here.  But if there is one thing about the film that has me scratching my head it’s the decision to make The Vulture of all people the main antagonist of the first movie.  While there are certainly worse villains to choose from, it seemed like an odd choice given Spider-Man’s huge colorful gallery of supervillains and like a wasted opportunity to include a decent villain into the main MCU for a change.  But it none the less inspired me to look at the character’s comic book origins and see just where he first appeared in the Spider-Man mythos and what the circumstances of that appearance were.  So, without further ado, this is Comic Book Spotlight shining a light on The Amazing Spider-Man #2.
The story takes place early on in Spider-Man’s career as a crime fighter with his super heroic credits only consisting of taking down Uncle Ben’s killer, saving an astronaut in a faulty spaceship and apprehending The Chameleon.  At this point in the series Peter is more concerned with his family’s financial situation after Uncle Ben’s death and is trying to find ways to make money for himself and Aunt May.  As luck would have it, J. Johnna Jameson, the publisher/editor of The Daily Bugle, has put out an ad for reliable photographs of The Vulture; a new supervillain who has been flying around New York robbing people in the guise of the scavenger bird.  Seeing an opportunity to make some real money, Peter sets out to find The Vulture as Spider-Man to get some decent pictures of the new villain to sell to the paper.  And…you know…maybe stop the thief who has been terrorizing the city.  If he has time and just feels like doing super hero stuff.

This is the thing that is undoubtedly going to catch a lot of people off guard with this comic.  Every single character that has ever been created for the medium has undergone some change be it minor or significant.  But in this issue and the stories that came before it, it’s quite frankly astounding to see just how much of a selfish greedy twat that Peter is.  Yes, the big idea behind Spider-Man and many other early Marvel characters was that unlike their DC comic counterparts they would have otherwise realistic problems that would affect both their regular and secret identities.  And yes, he is doing a lot of this to help Aunt May with the bills but it seems like these earlier stories completely revolve around Peter trying to get paid.  The first story of the first issue, for example, focuses almost half of its narrative panel space on Spider-Man trying to get a job as a performer but can’t due to bad PR from the Bugle.  Then the next story of the issue picks up with him trying to join the Fantastic Four because he mistakenly thinks that they are rich which again is the focus of half the story with Peter just kind of stumbling into heroic scenarios almost by accident.

The good news about this issue is that despite Peter being primarily motivated by money it’s a far more structurally sound story then its predecessors and we begin to see Peter take a more active interest in stopping these villains, even if it’s mostly in self-defense.  It has a proper three act structure that gives it a better narrative flow then previous stories had with a proper beginning, middle and end that moves along at a brisk but never rushed pace.  Additionally, despite Peter’s greed, we see what appears to be part of a much larger character arc for him in play that will span multiple issues.  The whole “With Great Power…” thing was thoroughly hammered into Peter’s mind, (and by extension our minds), in Amazing Fantasy #15 but what seems to be happening is that Lee and Ditko are acknowledging that Peter is…well human.  When it comes right down to it changes in people usually aren’t sudden and they often take some time to happen and settle into one’s personality, regardless of how harsh the lesson that provokes that change may have been.  It’s the kind of acknowledgement that you really don’t see happen in…well…any fictional medium and it’s rather refreshing to see it play out in a book this old.  Even if it’s still odd to see Peter channeling Scrooge McDuck.

Legacy-wise it also happens to be the story where several reoccurring story threads for the character originated.  This was the first time, for example, that Peter met J. Johnna Jameson and sold him pictures of his Spider-Man exploits; something that would become a reoccurring source of employment for the character as well as his main way of making money in the Sam Rami films and animated series of the 90s.  But it’s biggest contribution to the Spider-Man mythos was in establishing just what a Spider-Man villain is.  While technically The Chameleon was the first reoccurring “supervillain” that Spider-Man faced in Issue #1, he wasn’t really what you would call anyone’s idea of a Silver Age comic book villain.  He was more or less just a thief who was really good at switching outfits at a moment’s notice.  With The Vulture, however, we get the full range of Silver Age cheesiness.  He’s a bad guy who does bad things seemingly as a hobby, has a colorful outfit with a silly gimmick who swears eternal vengeance upon Spider-Man for thwarting his dastardly plans and set the foundation for most of the character’s nemesis pool. 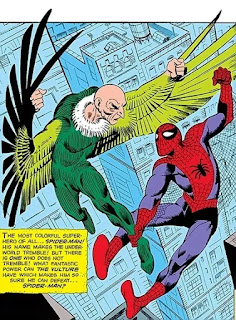 If there is one negative with the story, however, it lays in The Vulture himself.  The character is a thief with a scavenger bird gimmick and that’s about it.  We don’t learn anything about his background nor do we ever learn why it is he steal for a living outside of him just being a bad guy who needs to be stopped.  He doesn’t get much of a personality beyond being a colorfully dressed mustache twirler and seems to only exist for Spider-Man to fight.  Heck, throughout the story we never even learn his real name.  That how little we learn about him.

The artwork itself is good and is more or less what you expect out of silver age artwork. The designs of the characters and outfits are silly and make very little sense when you stop and think about it.  It’s detailed enough for you to make out what is going on but not detailed enough to where you’ll find yourself staring at if for hours to find new details and subtleties.  It is, however, very colorful and appealing to look at and helps give the thing an overall sense of fun that seems to be lacking in the medium these days.
Overall, the Vulture storyline in The Amazing Spider-Man #2 is just traditional silver age comic fun.  Its plot isn’t complicated but is well structured enough to where you can take it seriously and set up several traditions for the characters.  The art isn’t exactly what you would call Alex Ross material but it more then gets the job done with some now iconic designs.  It just a fun little story and it’s impossible not to get a little smile on your face while reading it.  Maybe it is outdated but it’s still a fun little book.  I say give it a look.