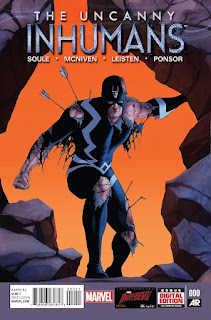 When it comes to fictional mediums sometimes the reason why a particular product came to exist can be just as if not more interesting than the work itself.  James O’Barr’s The Crow, for example, is not a particularly good book but the actual tragedy that the man experienced that compelled and/or inspired him to write it is a legitimately heartbreaking one.  The story behind Miracleman’s existence is a dense, convoluted tale of publisher conflicts and rights disputes that you just can’t make up but the end product can at best be described as the beta version of Alan Moore’s Watchmen and Neil Gaiman’s Sandman.  But then you occasionally get a product that turns out pretty good despite its reasons for being made or the behind these scenes drama.  And The Uncanny Inhumans series is absolutely one of these series.  For the most part.

For those of you who aren’t aware, for the past ten years or so Marvel has effectively been locked in a cock measuring blood feud with 20th Century Fox over the film rights to a number of its characters that Marvel first sold to them back in the 90s in order to get itself out of bankruptcy.  This list most notably includes Marvel’s first family, The Fantastic Four and the X-Men as these two are more or less the only Marvel comic property that Marvel itself doesn’t hold the film rights to.  Because of this the people running Marvel decided that it would be best not to promote the characters that Fox still owns, drastically reducing, if not flat out eliminating their roles in the Marvel Universe and its merchandising.  The most noteworthy consequence of this effort has been the flat-out elimination of the Fantastic Four name from the comics, putting both Ben Grimm and Johnny Storm into supporting roles in other books while Reed and Sue are off in the ether somewhere being gods or something, (look it up because otherwise, we’ll be here all day).  It truly is a sad affair for fans of Marvel’s first family but then you look at what the company has been trying to do to the X-Men and honestly it would be funny if it wasn’t so sad.

You see over the past few years Marvel boss Isaac Perlmutter has reportedly been pushing for the undercutting of the X-Men’s role in the Marvel Universe and trying to replace them with the Inhumans who, in his mind, are apparently similar enough to the X-Men to serve as replacements.  It’s gone over about as well as you might think.  While there aren’t exactly people protesting outside of Marvel’s offices over it the whole thing is not having the desired effect.  The Inhuman’s film was unofficially canceled the moment Marvel Studio President Kevin Feige no longer had to answer to Perlmutter, the Inhumans heavy third season of Agents of S.H.I.E.L.D. was a disaster and the reaction to the ABC Inhumans miniseries has been…well…negative might be a generous term.  Heck, even in the comic realm the characters have more or less disappeared from the spotlight after being major parts of both the Civil War II and Inhumans V.S. X-Men events with both of their main series canceled after the end of the latter and replaced with newer series that doesn’t even bare the Inhuman name.

Now, why has this move been such a disaster?  Well, for one thing, it’s pretty clear that without Feige’s leadership the live action stuff can easily end up just as bad as any other production made by a third-rate studio.  It’s also pretty clear that the people in charge of these projects are not creators with vision but petty, greedy businessmen with an ax to grind who want all of the money as opposed to some of the money.  But when it comes to the comics, (and to an extent the live action material), it’s clear that there is something else at play.  You see despite all of the efforts that Perlmutter and his cohorts put into replacing the X-Men with the Inhumans they somehow failed to realize that you can’t replace fifty years’ worth of nostalgia and pop cultural presence with what amounts to a cheap knockoff.  It’s as if Hasbro demanded that Gen Xers throw away all their nostalgic attachment for Transformers and The Teenage Mutant Ninja Turtles and replace it with GoBots and The Street Sharks.  It’s just not something that’s going to happen and reeks of what amounts to a cynical, soulless old man’s idea of what kids want these days and every time I see one of these projects crash and burn I can’t help but feel a bit of smug joy to see said old man proved a failure.  But, to be fair, the people who are actually writing the Inhuman comics seem to be aware of this and don’t actually try to replace the X-Men as much as they try to make it work as its own thing.  And the books are all the better for it.
Running for 21 issues, (including issue 0), and a single annual issue, The Uncanny Inhumans was one of the earlier series to be launched after Marvel’s Secret Wars reboot event.  Written by Charles Soule, the story focused on the higher-ups of New Attilan’s monarchy and the internal family drama that comes from being the royal family of an entire race.  Now if this sounds like a ridiculously melodramatic, soap opera-esque set up it’s because…well, it kind of is.  It doesn’t focus so much on the actual running of the Inhuman society as it does the strains it takes on the family and those surrounding them which is what makes it kind of unique.

The first story arc, for example, focuses on the royal family and company as they try to rescue Black Bolt’s son from the clutches of Kang the Conqueror whom Black Bolt had asked to protect him before the multiverse blew up during the Secret Wars event, (once again look it up because otherwise, we’ll be here all day).  This, of course, leads to time travel, action, drama, dramatic twists and all kinds of good stuff.  The brilliance of it though is that it’s not really about any of that.  The story is, in all honesty, about Black Bolt and Medusa’s complicated relationship with not only one another but their son as well and how the two of them may have failed as parents.  In fact, as the series goes on and this matter is resolved it becomes clear that there are issues between these people that are unrepairable and don’t exactly have the happy ending that we all hope for.  It’s a very refreshing change of pace from the usual over the top spectacle that Marvel employs in its stories and is a theme that book maintains throughout its twenty-issue run.

The downside to this is that once it gets past the first story arc it never quite gets to that same level again.  Now don’t get me wrong.  The rest of the story arcs are fine and do a great job of diving into the same thematic material.  One story arc, for example, deals with the very awkward fact that Johnny Storm and Medusa are dating and that Johnny used to be with Medusa’s younger sister, Crystal.  This ultimately causes a rift between the three that has some immediate payoff, but we’re never given a clear answer as to whether or not this rift will ever be healed.  In another, we have a set of twins who manipulate another Inhuman to bring their dead mother back from the grave but has an expectedly tragic result.  It’s all great stuff.  It’s just that none of these stores quite measure up to the first.
This is primarily due to the length of the individual stories.  You see past the first story all the additional stories were at most only four issues long and didn’t have the time to tell a lengthy, impactful story.  This is mainly because it kept having to stop and tell a tie-in story for whatever event comic was going on which would last anywhere from two to four issues of the book’s already short run.  Because of this it just didn’t have the time to tell a story that could match the complexity of its first and just ran out of time.
Unfortunately, there really isn’t much more to say on this one.  It’s a book that focuses on the themes of family dramas and irreparable relationships, but it doesn’t really get the time to tell enough of these kinds of stories properly which was a shame.  I would say that if you’re looking for a place to start with the Inhumans this series is as good of a place as any but there really isn’t much more to say beyond that.  Sadly, like the television show, it’s easily one of those cases where the reason it was made was far more interesting than the product itself.