You know people, I really don’t go into these things with the intent to dislike them.  I didn’t go into The Secret Service or Wonder Woman: Earth One and expect to literally hate everything about them.  I didn’t go into Lucifer and expect to be so indifferent towards it.  It just kind of happened.  And the first volume of New 52 Supergirl?  This one I went into expecting to like.  I remember liking it well enough when it first came out and I was expecting some genuine entertainment value out of it.  That’s not to say that I didn’t get any per say, but if you’re looking for a book that encapsulated everything that was wrong with the early New 52, this is it.
Now originally this one wasn’t even on the docket.  For the return of the Supergirl TV show, I wanted to take a look at the first volume of Supergirl Rebirth.  Overall, Rebirth has been an imprint that I have heard nothing but positive things about and seems like a good place for someone to jump into the DC side of comics.  But then I found out that a character who was introduced in today’s subject matter would be a main antagonist for the new season and the decision was made for me.  Specifically, the season is set to introduce Reign the World Killer who also happens to be one of the few decent original characters that The New 52 produced.  As such, it was a volume that I was eager to revisit and one that I had high hopes for.  So, let’s shine a spotlight on just how the writers and artists managed to botch it up.
The story revolves around of Kara Zor -El who has recently crashed on Earth and…errr…. well she just kind of starts freaking out and attacks everything that’s in front of her and jumps from one poorly paced plot point to another without any of them being properly fleshed out.  Over the course of the volume, she has private corporations try and mess with her, government agencies trying to contain her, gains new abilities that she can’t control and, at the same time, must face the truth that the world she knows is gone.  Unfortunately, they go about this in the most uninteresting way possible.  She encounters guys in mech suits and she beats them up.  She runs into Superman and gets into a fist fight with him.  She runs into some shady corporate guys and has to fight through them before finding her way back to her home city.  Then she encounters The World Killers who follow her back to Earth where she fights them off, all the while yelling and screaming about it all.  And if that sounds fast-paced but narratively shallow…well…it’s because it is.  There really isn’t much going on in the book outside of that.
The main problem with the book is that it’s kind of all over the place with its story and doesn’t know how to properly pace itself.  It constantly jumps from one plot point to another at a rushed rate, as if someone had told the writers that they needed to include all this material but only had a handful of issues to do it.  While reading it one can’t help but notice that there is enough narrative material to full up multiple volumes that the book has instead condensed into a handful of issues for some reason.  Her initial encounter with Superman, for example, feels like it should have been its own multiple issue story arc but was instead used as a cliffhanger bookend for the first issue.  The second issue is entirely comprised of a fight between the two and during the third, he gives her a rushed recap as to what happened to Krypton and how he ended up on Earth and what he’s been doing before she runs off to the next plot point.  All of which feels like it would have fit more naturally into a story arc that was dedicated to just the two of them as opposed to being a momentary distraction. 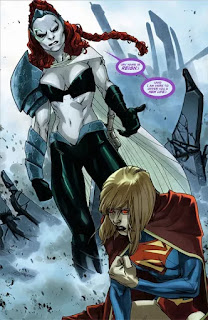 Likewise, we have her encounter with Mr. Tycho.  When we are first introduced to him it seemed as if they were trying to set him up as Supergirl’s version of Lex Luthor but ultimately comes off as just another gazillionaire bad guy with way more power then he logically should have who are bizarrely common in the D.C. Universe.  Once again it feels as if his encounter with Supergirl should have made up an entire volume on its own but was instead condensed into a smaller one for reasons that are probably only known to the creative team.  Heck even Reign is a character who feels like she was shoehorned in.  Everything about this character and her fellow World Killers feels like it should be big, grand and important but somehow ends up as a smaller plot point.  She only appears in the last quarter of the 5th issue and everything with her is wrapped up by the 7th and to my knowledge, she never appears in the D.C. Universe again.   Once again, it feels like as if the character was supposed to be part of a much larger story arc.  It’s as if the writers had originally intended it to be a six-issue story but was instead condensed to three.  Ultimately one can’t help but feel as if we were cheated out of a more interesting story because of whatever was going on behind the scenes of The New 52.

Even the artwork seems to be a victim of the New 52 mindset.  For the most part, the art is pretty good and keeps everything going at a fast pace which is the only thing that keeps it readable.  But whenever a female character shows up it becomes a bit cringeworthy.  Supergirl, for example, doesn’t even wear pants.  She just wears this bizarre outfit that looks like a long-sleeved, one-piece bathing suit that is about a size too small for her.  Every time it shows her back the artists draw her butt in such a way that her entire butt crack is outlined in vivid detail and I kept finding myself looking and thinking “what the hell?”.  Likewise, Reign, our big new original character looks like something out of a BDSM themed strip club and I couldn’t help but shake my head as I looked at it.  Heck, there is even a random secretary character who pops up and has to have some cleavage showing lest the artists upset the 13-year-old demographic.  It’s just an odd series of artistic decisions that had me rolling my eyes in disdain.
In the end, however, the first volume of New 52 Supergirl is just kind of disposable.  For the most part, it’s not really offensive but it lacks any narrative focus and keeps jumping around from one plot point to another and never allows us to settle in and get invested in what is going on in the book.  I suppose as far as introductions go for the character you could certainly do worse and it was by no means the worst start to a New 52 series but there were certainly better.  In all honesty, though most people would probably recommend Rebirth Supergirl as the best place to start and given what I’ve read of it, I would recommend that you do the same thing.